Donald was born in Mutare, Zimbabwe on the 22nd of December, 2002.  He began to develop normally until it became clear that something was wrong.

In June, 2006, when Donald was only 3 years old, his Father passed. Tragically, Donald also lost his Mother two months later; he became a double-orphan.

Donald’s Grandmother and family cared for him for the next ten years. By the time Donald was 13, and she at 87, the family could no longer cope with Donald’s challenges alone. He had endured surgeries, and years of ineffective treatment; now Donald’s family couldn’t afford to send him elsewhere for care. Donald could still walk without assistance, however his overall condition continued to decline. Now partially blind, cancer and tumours continued to riddle his face, head and tongue; Donald could no longer attend school and was forced to drop out. He lived in pain and without hope; doctors told Donald they had done all they could do for him.

In February, 2017, Donald’s family took his tragic story to the media in hopes that the public may assist. It was their last hope. You can read the original National ZBC story here. Another local story published in April, 2017 can be viewed here.

Supporters can donate any amount for Donald via PayPal here.

Spare a thought for cancer patients

He has never enjoyed childhood as he was in and out of hospital beginning at the age of three and now at 14 years Donald Dziruni who suffers from a condition called ‘Xerodema Pigmentosa’ is a school dropout as the condition is worsening with each new day. Xeroderma Pigmentosa is a rare condition passed down through families in which the skin and tissue covering the eye are extremely sensitive to ultraviolet light.

The condition of pigmentosa has become a thorn in the flesh for Donald having lived with the condition for 14 years.

The condition which was diagnosed at the age of three has now worsened and as a result he is now partially blind.

The pigmentosa disease has become full blown deforming his face and head.

The disease has begun slowly to destroy his lips and despite five separate operations which were carried out to try and manage the condition, he is getting worse day by day.

Worse still, Donald is being looked after by his aunt who is blind and all her savings have ran out.

Mrs Helen Dziruni, the aunt, is pinning her hopes on the intervention of well wishers.

Like any other child, Donald still believes that his dream to become a nurse or an engineer can be realised, but that wish can only be fulfilled once he gets medical assistance.

His uncle Mr Kenneth Dziruni together with other family members have tried to get help from local health institutions and even churches but to no avail.

The family is now appealing for financial assistance as the hospital bills have become too heavy.

For the past 14 years his desire to live a healthy life has just but become a pipe dream.

It has been pain and more pain for him day and night.

Donald in 2017 – BEFORE & AFTER Treatment
(Photos: Courtesy of Donald’s Family / edited by Dr. Robert Melamede, Ph.D.) 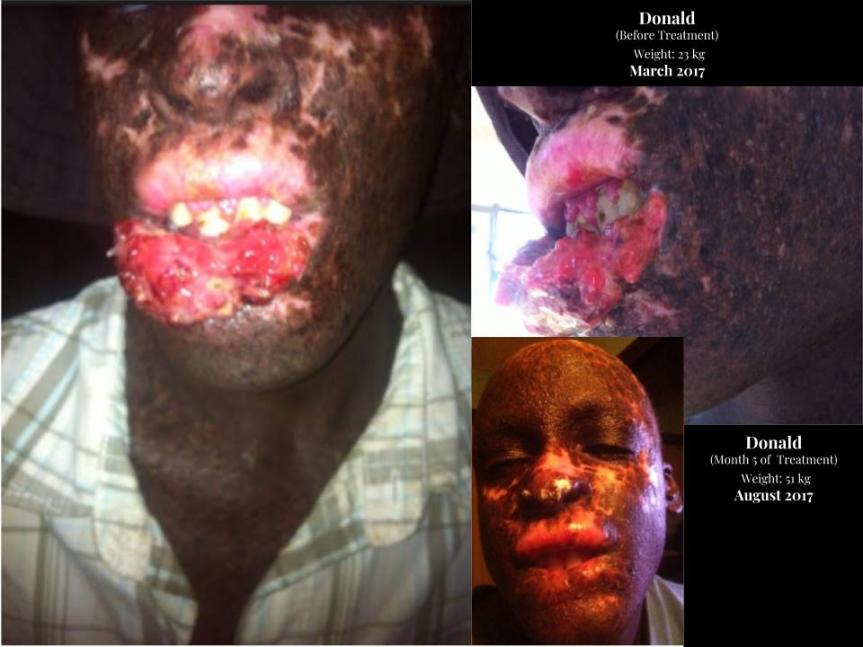 Vice President Mphoko and the Office of the President and Cabinet (OPC) learned of Donald’s struggle and formed a special team to address the situation.  Health experts, researchers and specialists from around the world were consulted; within weeks, an approved support plan and observational study commenced with the consent of Donald’s family. 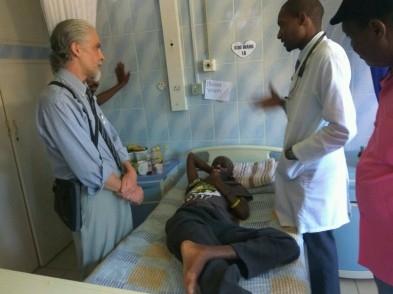 Background Information
Xenoderma pigmentation is a rare disorder transmitted in an autosome recessive manner. It is characterized by skin that is extremely sensitive to light (photosensitive skin) with pigment changes and showing tendering to premature aging and malignant tumor development. The defect is in the DNA damaged by UV radiation. No curative medicine exist but management include adequate solar protection by use of sunblocking creams and clothing. The disease carries a poor prognosis with less than 40% of the affected burning beyond 20 years and mean age of skin cancer is 8 years.

Donald was admitted from Parirenyatwa Hospital after having developed a malignant tumor on his lower lip. Most convention treatment modalities had not yielded much positive results. Now he has been started on traditional cannabinoid therapy under the guidance of Jason Bowman which includes the use of some herbal creams, drinks, sprays and special diet amongst other things.

The progress made so far within a month of commencement of the medication is overwhelmingly encouraging. There is early evidence of the tumor shrinking and also an improvement in the state of the skin as a whole.

We hope the young boy’s condition continues to improve and hope to fully achieve the intended goal which is to cure the patient.

Donald was discharged from CCH hospital in August, 2017 with V.P. Mphoko, the Health Minister, and CCH C.E.O., Dr. Moyo presiding; he returned to Mutare and continued treatment from home for the following three months. Donald’s healing journey would increasing become a story of great public interest.

In November, 2017 sudden changes in government overturned the OPC project respecting Donald. His treatment became at risk. Today, left without access to his diet and medicine, Donald’s vision and skin continue to deteriorate once again.

Today, Donald’s family needs your help in order to continue his treatment. Specialists and those treating him have not abandoned hope, but without funding, Donald can not continue his healing journey.

The Lionz Herbz Society (LHS) now leads a coordinated effort, along with Donald and his family, to help on a long-term basis.

We are thankful to those who have put our names to, committed to study, developed the protocol, and commenced Donald’s treatment.  Diligent observations and reports have been collected and published. Our main steadfast priority is simple: a suitable long-term case management plan must remain in place for Donald.  We are also thankful for your show of interest and support and most especially, for the great trust and faith Donald and his caring family have placed in us to support his healing journey.

If you want to donate to, or contact organisers, Donald or his family,
or wish to help in some other way, please complete the form here.
Thanks for sparing us a thought.   – Jason Bowman
(Canadian Representative for Donald & the Dziruni Family)

From Cells to Societies: A Dynamic Fractal by Dr. Robert Melamede, Ph.D. 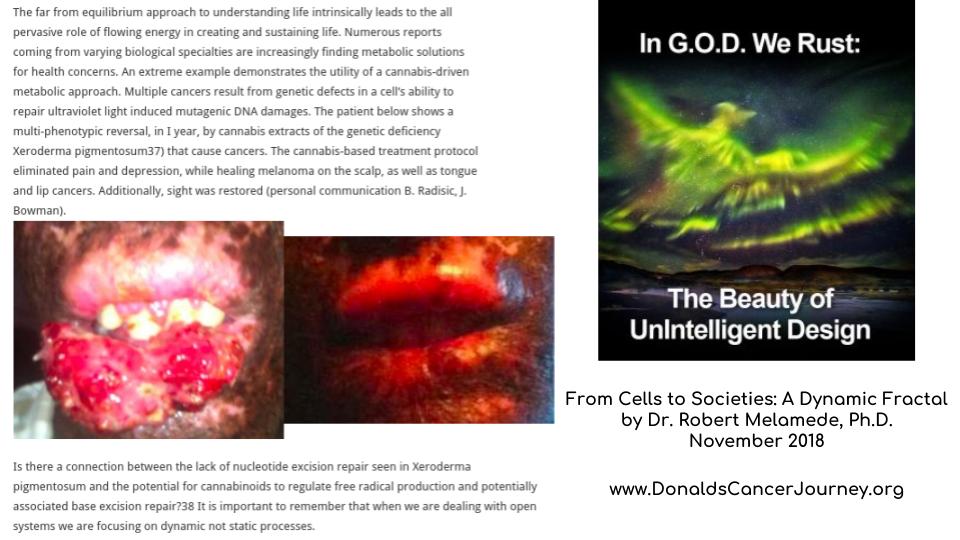 Supporters can donate via Paypal here. You can contact organisers, Donald or his family, if you wish to help in some other way here. Thanks for sparing us a thought.  – Jason Bowman

“If we had money, we would take him to specialists or outside the country for treatment… It pains me to have Donnie here while others of his age are at school. We have visited many hospitals and churches but there is no change.” – Donald’s Aunt Theresa Dziruni (Before Donald’s treatment in 2017)

Donald remains hopeful he can continue to be well and further his studies.

“I am in pain. I no longer go to school and I am now partially blind but I want to continue with my education. I want to be a nurse or an engineer,” Donald Dziruni (Before treatment in 2017)